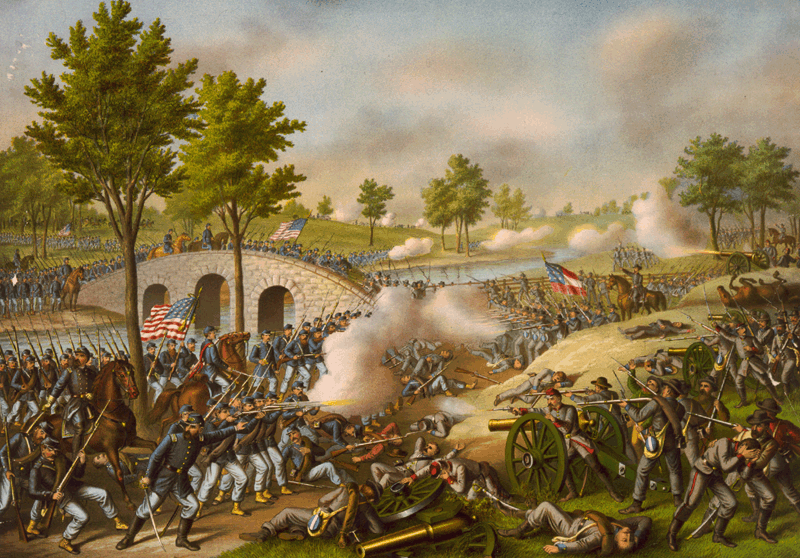 The Battle of Antietam lasted only three days, from September 16-18, 1862. Though short, the Battle of Antietam stands out as the single bloodiest day in the Civil War. By the end of the battle, 2,108 Union soldiers were confirmed dead. Another 10,293 were unaccounted for. Confederate losses were only slightly less, but it is estimated that General Robert E. Lee lost more than a quarter of his army.

Twenty five percent of the Union army was lost at the Battle of Antietam. Confederate forces suffered a loss of thirty one percent. September 17, 1862 went down in the books as the single bloodiest day in not only the Civil War, but all of American military history.

The Battle of Antietam is also known as the Battle of Sharpsburg, due to its close vicinity to Sharpsburg, Maryland. The assault swept back and forth between the West Woods and Miller’s Cornfield. The final assault in the battle occurred when the Union army forced its way over a bullet strewn stone bridge to cross Antietam creek. At this crucial point in the battle, more Confederate troops arrived from Harper’s Ferry to launch a surprise counterattack, balancing the scales once more.

Despite the Confederate army’s inferior numbers, General Lee was able to hold his own against the Union forces, led by George McClellan. Though he was outnumbered two-to-one, General Lee sent his entire army to fight at the Battle of Antietam. General McClellan, on the other hand, committed only three quarters of his Union troops to the battle, evening the odds once again.