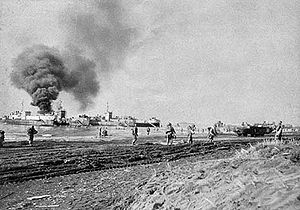 January 22, 1944 was the start of the Battle of Anzio, a battle that was part of the Italian Theater of World War II. The Allies and Germans fought the battle. Allied leaders were Lieutenant General Mark Clark, Major General John P. Lucas, General Harold Alexander and Major General Lucian Truscott, along with 36,000 soldiers. German leaders included Field Marshall Albert Kesselring and Colonel General Eberhard von Mackensen as well as 20,000 troops.

At the start of the battle, the British 1st Infantry Division landed north of Anzio. They met with almost no resistance and quickly traveled inland. The area was covered with 36,000 troops before the night was over. The division secured a beachhead that was roughly 2-4 miles deep. Soon after, Lucas began strengthening the perimeter, though many believed it undercut the operation.

On January 23, Mackensen was assigned to take over the German defense and the US 45th Infantry Division and the US 1st Armored Division gave Lucas reinforcement. He launched a two-prong attack on January 30 with the British. They attacked up to Via Anziate towards Compoleone while the US 3rd Infantry and Rangers attacked in Cisterna. The Rangers took heavy losses. The British were able to gain heavy ground, but did not take over the town.

By early February, Mackensen had 100,000 soldiers and Lucas had just over 76,000. On February 3, Germans attacked the Allies by focusing on Via Anziate and pushed the British back over several days. On February 6, Allied forces were pushed back. By February 22, Lucas’ bad performance led to Major General Lucian Truscott replacing him.

German assault began near Cisterna on February 29, causing heavy losses. Truscott and Mackensen opted to suspend offensive operations until Spring. During the time that the offensive operations were on hiatus, Kesselring planned the Caesar C defensive lines between the beachhead and Rome while Alexander, Clark and Truscott planned Operation Diadem, a plan that included two separate operations.

Operation Buffalo was a planned attack to cut Route 6 at Valmontone so that troops could trap the German Tenth Army. The second plan, Operation Turtle, included an advance through Campoleone and Albano that would eventually head towards Rome. By May 23, Allied troops hit the Gustav Line. American forces attacked Cisterna on May 25, 1944 and an attack towards Rome on May 29. The VI Corps exploited a gap in German defenses soon after and the German line collapsed on June 2, 1944.

The battle ended when Rome fell on June 5, 1944. Allied forces lost 7,000 men to death with 36,000 wounded and missing of the 150,000 men that they had by the end of the battle. German losses included 5,000 deceased men and 30,500 wounded or missing of their 130,000 men. Nearly 5,000 German troops were captured. The end of the Battle of Anzio helped to hold the Germans in Italy, preventing them from entering Northwestern Europe before the Normandy Invasion. Although the Battle of Anzio was ultimately successful, it is still widely criticized as being poorly planned and executed.