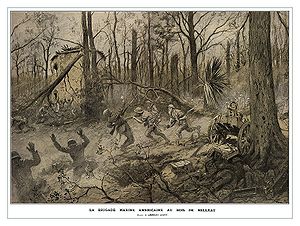 The spring of 1918 marked the first opportunity in World War I for the forces of the United States, in coordination with their French and British Allies, to operate on a large scale against the German Army. The war that had begun in Bosnia in 1914 was soon to finish but few in the fighting nations could have known that. The Allies were eagerly receiving fresh aid from their new American partners in the war. However, the Germans had also brought new forces to the Western Front, which sprawled in trenches across northern France. One of the first focal points in this renewed conflict would be Belleau Wood, a forest in which relatively inexperienced US forces would face a hardened foe who had been fighting for close to four years now without stop.

In 1917, the Russians had surrendered to Germany and ceded great swaths of land to them. Garrisoning and defending this land was not as taxing as fighting for it, so the Germans were able to bring 50 divisions to the Western Front. They hoped to organize and execute an offensive before the Allies could put the new US forces in prepared positions. By the end of May 1918, it looked like their plans would succeed. German forces had wiped out the British 5th Army in two major operations. On May 27th, the frantic Allies threw two US divisions, the 2nd and the 3rd, into the battle near the Marne River. Stunned by the ferocity of the Americans’ defensive operations, the Germans wheeled right toward Belleau Wood in an attempt to flank them.

The Battle of Belleau Wood, June 1-8

The Germans devastated French defenders to the left of the US positions. Combined elements of the US reserve conducted a forced march across 6 miles overnight to fill the gap left by the retreating French. By June 3rd, American soldiers held a front 12 miles long in direct engagement with German forces. That afternoon, the Germans attempted to penetrate these defenses and cross the Marne River. They ran into US Marines commanded by Army General James Harbord, who had ignored French orders to dig trenches farther back from the front lines. He ordered the Marines to hold where they stood. The Marines fixed bayonets and dug shallow holes.

The German infantry advanced through fields of grain with their own bayonets fixed. The Marines opened fire when the Germans were just 100 yards away. Decimated by the withering barrage of bullets, German soldiers retreated back to Belleau Wood where they prepared defensive positions.

French forces, retreating from other segments of the front, recommended that the Marines fall back. It is not certain which Marine commander uttered the now famous reply: Retreat? Hell, we just got here. The Marines held that position against repeated attacks for two days.

On June 6th, the Allies preempted a German attack and launched an offensive which sent French forces to the left and the American Marines against Hill 142, from which point they were to proceed to occupy Belleau Wood. The two companies of Marines suffered terrible casualties, losing nearly all their officers, but they took the objective. The surviving company commander reorganized the forces and established defensive positions.

Fierce fighting continued through the 8th of June and multiple occasions of heroism are recorded. More than one medal for bravery was rewarded as a result of this battle, including the Medal of Honor. All told, 1,811 US soldiers died during this engagement. The number of German casualties is uncertain but more than 1,600 were taken prisoner.