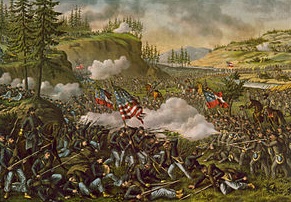 In early September of 1863 in the midst of the Civil War, Union Maj. Gen. William Rosencrans retook Chattanooga from the Confederates. Chattanooga was a major rail hub, and securing it gave the Yankees a direct route to Atlanta and, thus, to the rest of the South. General Braxton Bragg of the Confederacy decided that he wanted to retake Chattanooga for the Rebels, so he led the Army of Tennessee against Rosencrans’ Army of the Cumberland on September 18, 1863.

The battle itself took place in Northeast Georgia in Catoosa and Walker Counties near Chickamauga Creek. The name of the creek loosely translates in Cherokee to “River of Death,” and the battle’s distinction of being the second bloodiest after Gettysburg makes the name appropriate. The earnest fighting took place during the 19th and 20th of September; the 19th was a day of fierce, back-and-forth fighting in close quarters that made confusion easy.

After a day of intense fighting, the Confederates were the beneficiaries of Northern blundering when Maj. Gen. Rosencrans was mistakenly informed of a supposed gap in the Union line. Rosencrans had publicly upbraided Brig. Gen. Thomas Wood earlier that morning for failing to move quickly enough, so Wood quickly shifted his Union troops when he received the misbegotten order, creating a gap that Lt. Gen. James Longstreet and his men exploited.

The wave of Confederate troops that broke through the created gap sent about one third of the Union Army fleeing in disarray. The Rebels confronted the remaining Yankee forces at Horseshoe Ridge and Snodgrass Hill; the fighting was fierce, but Longstreet was unable to break through the Union lines. The Union Army retreated, but Bragg and the Confederates failed to take advantage of the golden opportunity to rout the Army of the Cumberland. The Yankees escaped to Chattanooga after nightfall, and the Rebels were left to celebrate an incomplete victory.

History awards victory of the Battle of Chickamauga to the Confederates for forcing Gen. Rosencrans to retreat from the field, but the victory was only partial as Bragg’s forces failed to retake Chattanooga. The Confederates lost more men to fatal wounds than the Yankees (2,312 to the Union’s 1,657) and had more men receive nonfatal wounds as well (14,674 to the Yankees’ 9,756). The one numerical category in which the Rebels won was the “Captured or Missing” category, in which they only lost 1,468 men to the Union’s 4,757.

As is the case with many battles, victory at Chickamauga was an abstract concept that gave the Confederates little to nothing long-term. The Confederacy’s failure to capitalize on the Union’s gap blunder was costly on several fronts. The Rebels continued the siege of Chattanooga, but Union forces led by Maj. Gen. Ulysses S. Grant broke the siege a couple of months later. This Rebel defeat paved the way for General William Sherman’s infamous “March to the Sea” that destroyed a large swath of Georgia. A severe Union defeat also might have dealt a serious blow to President Abraham Lincoln’s reelection bid, but the relatively minor setback of Chickamauga did not damage his image too severely.

Confederate Lt. Gen. D.H. Hill called the Rebel victory at Chickamauga a “barren victory” and claimed that “the elan of the Southern soldier was never seen after Chickamauga.” The South eventually lost the Civil War, and some historians agree with Lt. Hill that Chickamauga was a turning point. To paraphrase a popular saying, “The South won the battle, but the North won the war.”