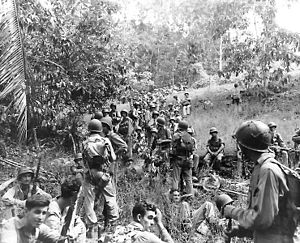 The Battle of Guadalcanal, fought during World War II, was both the Allies’ first major Pacific offensive and a turning point in the war against the Japanese.

Understanding that possession of Guadalcanal Island would solidify Japan’s great strategic advantage over the Allies, the United States realized it would have to challenge the Japanese directly for control of it. The U.S. First Marine Division landed on the island on August 7, 1942. By this time, the Japanese air base was almost complete. The Japanese had also secured a number of artillery positions in the surrounding hills and had nearly 8,400 soldiers on the island.

Scope of the Battle

In addition to its strategic importance, the Battle of Guadalcanal was also notable for being a hard fought, six month battle of attrition waged in the air, on sea, and on land.

The marines were able to take control of the Japanese airfield quickly. However, both the U.S. and Australian navies suffered serious defeats from Japanese air power early in the battle. Despite heavy Japanese bombing, the Allies were able to use the airfield to fly their own airplanes.

U.S. soldiers arrived on October 13, 1942. The ground fighting was fierce and occurred under horrible conditions. Many soldiers on both sides were either killed or debilitated due to malaria and other disease. The Allies were eventually able to repel the Japanese and secured the six miles between the air base and the shore. However, the Japanese still had a naval advantage and the sea battles were not going well for the Allies.

An important turning point in the battle occurred in November when Japan tried to reinforce its ground forces by sea. The United States had already established air superiority by then, so a sea arrival was Japan’s only option.

During a four day skirmish, Japan attempted to land another 10,000 soldiers on the island. The U.S. Navy was able to thwart this effort and only 4,000 of the Japanese soldiers were able to land.

As a result of the Allies now gaining the ground advantage through superior numbers, the Allies were able to take some critical high ground points on the island as well. By early 1943, the Allies were in control of Mount Austen, its western slope, and much of the surrounding area.

By the end of January 1943, the Americans had taken the Japanese headquarters at Kokumbona on the island. With their headquarters fallen and numerous Japanese soldiers taking refuge in the island’s jungle, Japan effected a stealth evacuation of the island, completed on February 8, 1943.

Impact of the Battle

All told the Battle of Guadalcanal lasted from August 7, 1942 through February 8, 1943. While fighting was vicious, Japan suffered the most casualties. The United States lost 1,592 troops of the almost 60,000 soldiers deployed, and more than 4,000 were injured. The Japanese lost 14,800 soldiers from fighting, and another 9,000 soldiers from tropical diseases, of a total 31,400 soldiers deployed. One thousand Japanese soldiers were taken prisoner. The Japanese were unable to replenish their lost resources, especially their elite naval aviators.

Strategically, the Allies’ victory at this battle ended Japanese air and naval superiority in the Pacific. It also secured open sea lanes to Australia. This Allies’ victory in this battle was the first step in what became an unrelenting march against the Japanese.