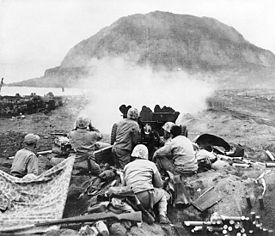 Iwo Jima is a mountainous island southeast of Japan which serves as the home of Mount Suribachi, an extinct volcano. The island, which sits in the Western Pacific Ocean, has become known around the world because of its association with World War II. The Battle of Iwo Jima proved to be a major turning point in World War II because it was part of a plan by the United States to end the war with Japan. The battle had a major influence on the United States’ decision to bomb Hiroshima and Nagasaki. The Battle of Iwo Jima is known as one of the most costly battles of World War II because of the loss of human lives on both the American and Japanese sides.

The United States fought to take Iwo Jima because of its proximity to Japan’s major islands. The allied forces wanted to launch an aerial campaign against Japanese forces, and they needed the strategic site because of its landing fields, which they wanted to use for bombers and fighter planes. The United States military felt that by capturing Iwo Jima, the United States Military would have a better chance of attacking major Japanese islands and strongholds such as Okinawa. Having control of the island also meant that the United States would have a strategic position for launching sea and air blockades against Japan’s Navy and Air Force, according to the Navy Department Library.

During the Battle of Iwo Jima, the United States Marines, led by Admiral Raymond A. Spruance, fought against Japanese forces led by General Tadamichi Kuribayashi. The Navy Department Library states that United States soldiers from the third, fourth and fifth divisions of the Unites States Navy proved to be a major part of the American victory. Throughout the battle, allied soldiers faced heavy attacks from Japanese forces. Capturing Mount Suribachi, a 550-foot volcano, on February 23 proved to be a major point in the battle, but the United States still had to fight against dedicated Japanese soldiers for the next month. The Japanese had a wide-spanning network of trenches and tunnels that made it difficult for American forces to engage them. The United States Military made slow progress, but it was able to capture the last of the Japanese soldiers in March.

The Battle of Iwo Jima is considered a major point in the war because it allowed United States president Harry Truman to see how long and hard Japanese forces would fight to keep control of their islands. It was because of Iwo Jima that the president ordered the atomic bombings of Hiroshima and Nagasaki, which resulted in the deaths of more than 120,000 Japanese people and ultimately ended World War II, according to the History Channel.