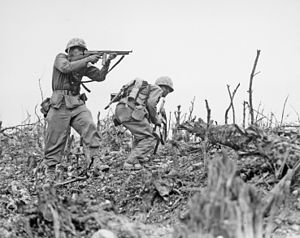 The battle of Okinawa began on April 1, 1945 as the largest amphibious assault in the Pacific Theater during World War II. Okinawa is one of the Ryuku Islands of Japan. The largest, and southernmost, island in the chain, Okinawa became an important asset to the American forces fighting in the Pacific Theater. Okinawa was strategically important to the US military in part because it’s four airfields were needed in order to launch a full-scale air assault on mainland Japan. The Americans wished to use its airstrips to launch bombing raids on Japan’s industrial complex.

In spite of rigorous attempts by US Intelligence Officers, little intelligence was gathered regarding the strength and size of the Japanese forces or about the strength of their air and sea battalions. Little was known as well about the tactics of the commander of the Japanese forces, General Mitsuru Ushijima. A twelve-year career military man, he rose quickly through the ranks due to his proven leadership during the Second Sino-Japanese War. Thought by all to be a fearless leader, he led thousands of Japanese troops to follow his example by committing suicide by seppuku in the final days of the battle, rather than face the dishonor of defeat.

The US Forces ground troops commander was a career military man named Lt. Gen. Simon Bolivar Buckner. In the final days of the battle, and ironically around the same time as General Ushijima’s suicide, Buckner was involved in a sniper mission on Japanese tanks; Buckner was secluded on a ridge between two coral boulders, a perfect vantage point for viewing the tanks below. But soon after getting into position a report of 47mm antitank shells hit the base of the coral. Either a shell fragment or a shattered piece of coral hit Buckner in the chest and he bled to death on the field of battle ten minutes later.

The battle, codenamed Operation Iceberg, consisted of 82 days of some of the ugliest fighting in the Pacific Theater. Both U.S. and Japanese forces suffered the heaviest casualties of this portion of the war. Over 100,000 Japanese soldiers were either wounded or killed in action. This figure also refers to a number of Japanese soldiers who avoided the shame of capture by committing suicide. Over 65,000 American soldiers were either wounded or killed in action. The casualty rate of civilian dwellers on the prefecture was staggering; tens of thousands of Japanese civilians were wounded and either killed as a result of the fighting or died by their own hands.

Japanese resistance failed on June 21, 1945 and US forces officially lay claim to this vital strategic position. Okinawans remaining on the island were routinely offered assistance by US personnel, although fearful of the American and British military, some Japanese remained in hiding, including the future governor of Okinawa Prefecture, Masahide Ot .Today the U.S. Military still has a presence on Okinawa, with roughly 36,000 military members and 5,000 civilian Department of Defense employees living, working and playing on the same ground over which thousands of lives were claimed to procure a key victory for Allied Forces which contributed greatly to the Allied victory in the war.