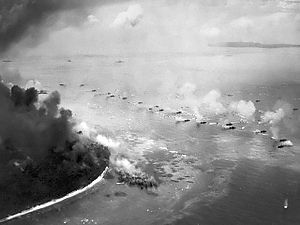 Peleliu, a tiny volcanic island about 500 miles east of the Philippines, was the site of one of the most fierce and costly battles of World War II. Held by nearly 11,000 Japanese troops, it was seen by some members of the military as a potential threat to future Allied operations in the Philippines, while to some others, it was believed to be an unimportant piece in the overall plan of battle. This disagreement contributed in the long run to making the bloody battle of Peleliu a controversial attack that lasted far longer than anticipated, and which resulted in more casualties than any other amphibious attack in the history of the United States military.

One marine commander had predicted that the tiny island would be taken by U.S. troops within a matter of days, but the battle lasted from September through November of 1944. Both General Douglas MacArthur and Admiral Chester Nimitz favored taking Peleliu before moving on to Okinawa and Taiwan so that Peleliu could be used as an airstrip, however, from that point their strategies diverged.

The Japanese military had analyzed their previous losses in order to develop an entirely new defense strategy that would rely on caves, bunkers and underground battle positions, some of which had been mine shafts, and all connected by a system of honeycombs and tunnels. The entrances to some of the underground positions had been fortified with armored, steel doors as well as engineered to resist hand grenade and flamethrower attacks. Further, the Japanese had established a base on Peleliu’s highest geographical point which allowed them to observe most of the island, including the airfield, and to see American troop movements while remaining out of sight.

Unlike the Japanese, the American army and marine forces maintained their previous battle strategies for the invasion, despite having suffered several thousand casualties in recent amphibious attacks at Biak. American forces wrongly believed that bombarding the island before the invasion had been successful, but in actuality, because the Japanese troops were in well-fortified hidden positions, they were virtually untouched, and waiting in hiding for the Americans. Japanese troops refrained from firing on the invading Americans immediately so they would not give away their positions until they were able to attack effectively. This strategy represented a dramatic difference from those used in previous encounters.

In the end, the Japanese were successful at killing between 50 and 60% of the military divisions on Peleliu, but the remaining marines and army troops fought on until finally securing the island on November 24, 1944, ending 73 days of brutal fighting. In total, the taking of Peleliu cost nearly 10,000 American lives.

Peleliu was the scene of the iconic story of a Japanese officer and 34 soldiers and sailors who hid out in caves, not knowing that the war had ended, until a Japanese Admiral convinced them three years later, in April of 1947, that the fighting was, indeed over.

The battle remains a source of controversy among military leaders because of Peleliu’s questionable strategic value to the overall war effort, however, from this savage battle, American military forces were able to learn a great deal about the new Japanese approach to island defense, which better prepared them for later successful assaults on Iwo Jima and Okinawa. American forces also learned new ways to approach and conquer the heavily defended and often hidden positions, which, again, proved valuable in future attacks. Having been taken by surprise once, the American military was determined not to let that happen a second time, and prepared for whatever new strategy the enemy might have in store.