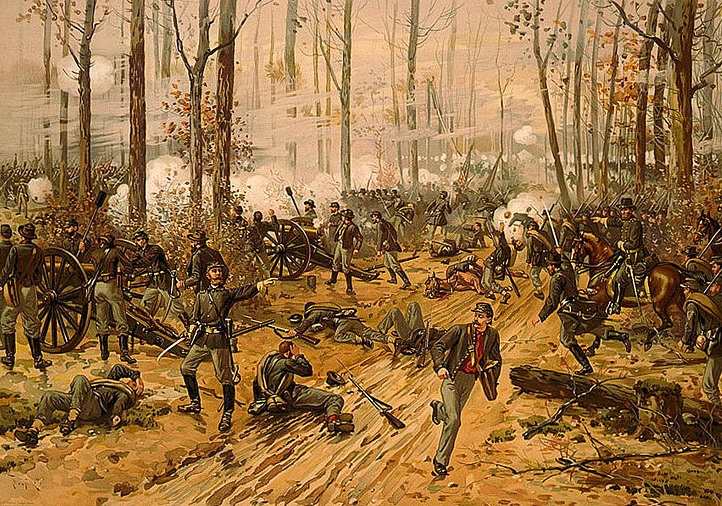 The Battle of Shiloh took place as part of the Civil War on April 6-7, 1862. As a result of the fall of Forts Henry and Donelson, General Albert Sidney Johnston and his Confederate troops were forced to fall back to parts of Tennessee, Alabama, and northern Mississippi, relinquishing Kentucky and much of middle-Tennessee. Johnston gathered his troops in Corinth, Mississippi and prepared for an attack against Ulysses S. Grant and his Union army. Grant, knowing Johnston and his troops were gathered in Corinth but unaware of a planned attack by the Southern army, traveled to Corinth to attack, but the plan was to wait for Don Carlos Buell’s Army of the Ohio and proceed together. Johnston attacked Grant’s army on April 6, 1862 near Pittsburg Landing, a steamboat dock on the Tennessee River, before Buell’s army arrived, taking the Union army by surprise.

Confederate forces drove the unprepared Union soldiers from their camps and threatened to overwhelm Grant’s command. Some Union soldiers, though, took a united stand against the Confederates and established a battle line at the sunken road, a three-foot deep trench known as the “Hornet’s Nest”. The Confederate’s heavy artillery helped them surround the Union troops and capture, kill, or wound most of them. General Johnston was fatally wounded on this first day of the Battle of Shiloh by a stray bullet while directing his troops and was replaced by General Pierre Gustave Toutant Beauregard, celebrated as the “hero” of the Battle of Bull Run. The bloody battle during a downpour left troops entangled, fighting on muddy roads and getting lost in the darkness and rain. The battle was to resume the next day.

Throughout the night, Buell’s army arrived to support the Union troops. Also, the timely arrival of one of Grant’s reserve armies, led by Major General Lewis Wallace, added to the Union army and reinforced it to over 50,000 troops, outnumbering Beauregard and his Confederate army of under 30,000 disorganized troops. Ulysses S. Grant and his Union forces attacked at dawn on April 7 and overpowered the Confederates, forcing them to retreat and return to their stronghold in Corinth. In this two-day battle, over 23,000 casualties were sustained. The Battle of Shiloh is known as one of the bloodiest and deadliest battles of the Civil War. The casualty figures were five times greater than that of the Battle of Bull Run.

The Battle of Shiloh was a very significant part of the Civil War. If the Union had lost badly, the Southern army would have stood a chance to take over cities such as St. Louis, Cincinnati, Chicago, and Cleveland as they would have been exposed. Kentucky and possibly Missouri would have joined the Confederacy which would have been devastating for the Union. None of this happened, but perhaps the largest significance of the Battle of Shiloh was what it taught the nation: that there would be no one single battle to end the war.