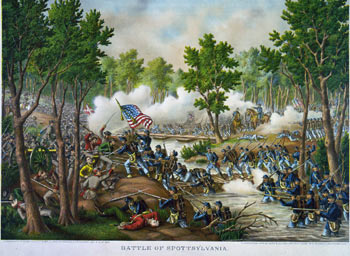 The two armies had already engaged one another earlier in May. In what became known as the Battle of the Wilderness, Lee’s smaller southern army attacked the larger northern one. Despite heavy losses, Grant decided not to retreat but pressed on to the southeast, trying again to put Union soldiers between Lee’s army and Richmond. General Lee marched his men all night and managed to position his army to block the attempt. He utilized both Major General J.E.B Stuart’s Cavalry and Major General Anderson’s First Corps. The Confederates were well entrenched before Grant arrived. The Union lost one of their Major Generals, John Sedgewick, early on in the fighting as he scouted the Confederate lines.

From May 8-21, the two armies clashed again and again in Spotsylvania, with both sides suffering many casualties as Grant’s army tried to break through any potentially weak spots they could find in the Confederate line.

Spotsylvania is known for the fierceness of its fighting. Some of the battle took place hand-to-hand with reliance on bayonets. This was the result of suggested tactics by Union Colonel Emory Upton, who had realized that hand-to-hand tactics might prove more effective than more traditional strategies when faced with such a firmly entrenched enemy. After an initial bayonet attack on May 10 proved somewhat successful, Grant agreed with that assessment. Spotsylvania ended up being the bloodiest battle of the Overland Campaign.

Spotsylvania was a crucial location. If Grant had been able to get there first and secure it, he could have blocked Lee’s access to Richmond, the capital city of the Confederacy. Although he was not able to do so, the losses inflicted on both sides were high. There were around 12,000 Confederate casualties and there were somewhere between 18,000 and 20,000 Union deaths.

A Bloody Step Toward Victory

Since the Union army was so much larger, they could afford greater losses, and Grant continued to press on from Spotsylvania. He and Lee met again at the North Anna River later in May. Grant’s tenacious attitude toward the overall campaign was clearly captured in a message he sent on May 11, declaring: “I propose to fight it out on this line if it takes all summer.” Such difficult battles ultimately weakened the Confederate army and led to the Siege of Petersburg and the final Union victory in the Civil War.