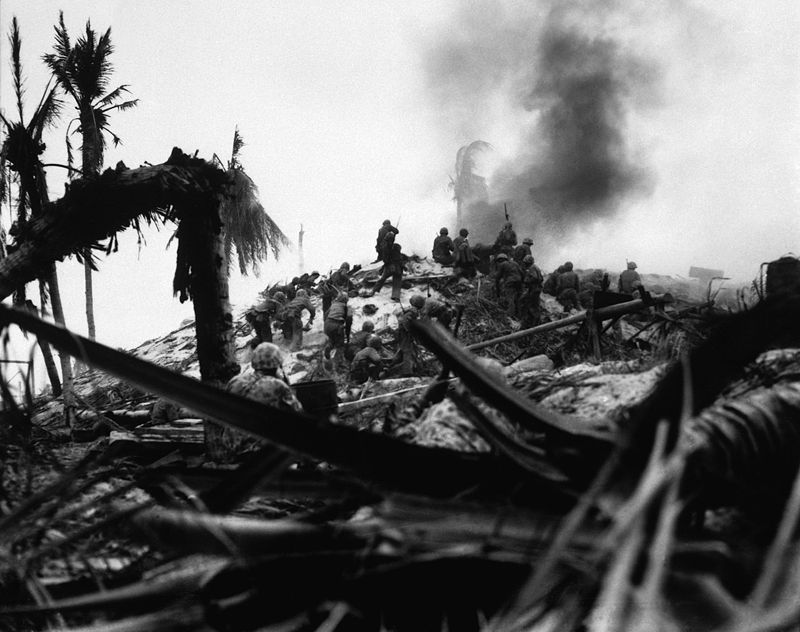 After winning Guadalcanal from the Japanese in February of 1943 during World War II, the United States decided that it needed to advance to the central Pacific in order to get closer to Japan. Naval wisdom of the day maintained that troops must have ships to back them up, so any land assault needed to be made with naval firepower before and behind them. The U.S.’s ultimate goal was to take the Philippines and, ultimately, Japan, but other islands and atolls separated U.S. territory from that goal. If the United States could take the Marshall Islands, then they could take the Marianas Islands, which could then be used to take the Philippines and Japan. Before they could reach that point, however, they had to take the Gilbert Islands, or, more specifically, the Japanese-held airbase on Betio Island in the Tarawa Atoll.

The Battle of Tarawa began on November 20, 1943 in the early morning hours as the Japaneses’ 8-inch guns dueled with the batteries of the Colorado and the Maryland. The two ships successfully took out most of the Japanese guns and other ships and planes bombed the island, causing many of the men to feel confident that the bulk of the Japanese forces had been destroyed in the bombardment. The error of these assumptions became apparent as American forces came under heavy fire when their Higgins boats failed to clear the reefs. Unfortunately for the Americans, neap tide was in full effect, making landing on the shore impossible. The U.S. Marines assaulting the island had to crawl over jagged coral through withering Japanese fire to make the beach, and many perished.

The beach had been divided into 6 sections called Red 1, Red 2, Red 3, Green, Black 1, and Black 2. The Black beaches were on the western side of the island and were not used, but the Red beaches were sites of bitter warfare. Low tide plagued the Americans for a second day in a row, so troops once again had to take the hard way to the beach. The second day of fighting saw significant advancement by the Americans as they moved closer to the airstrip, and they controlled the entire western part of the island by the end of the second day. They also killed Japanese atoll commander Kaigun Shōshō Keiji Shibazaki, who had said that a million men would need a hundred years to take Tarawa.

Taking Tarawa took only two more days as opposed to a million years, but the Americans earned their victory. The third day saw a rise in tide and the disembarking of tanks and artillery; the U.S. pushed Japanese forces into a small pocket near the end of the third day, after which the Japanese attacked at night. The Japanese assault was unsuccessful, and the determined Japanese troops launched a suicidal banzai assault on the fourth day rather than surrender. They fought to almost the last man; out of 3,636 Japanese troops, only 17 surrendered. Only 129 Japanese and Korean laborers out of 2,200 survived, combining for a total loss of 4,690 Japanese fatalities.

Tarawa was a victory for the Americans, albeit a costly one that greatly upset the American public. While the 1,009 killed marines and the 687 naval soldiers were significantly less fatalities than the Japanese, may Americans could not understand why so many lives had been lost over such a seemingly unimportant little island. The Americans took the mistakes they made and planned better for the next Pacific Island battles, many of which went on to be successful yet costly victories.