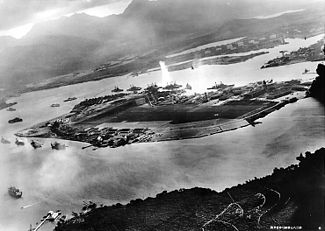 Described as the “date that will live in infamy” by President Roosevelt started out as any other Sunday on December 7, 1941 at the United States naval base in Pearl Harbor located on Oahu, one of the Hawaiian islands. At 7:55 am, over three hundred Japanese planes dropped bombs on eight U.S. battleships. Seven were lined up in Battleship Row, and one was in dry dock for repairs. More than ninety naval vessels were anchored in the harbor. Fortunately, all of the U.S. aircraft carriers were at sea. Commander Mitsuo Fuchida, leader of the attack, called out “Tora! Tora! Tora!”(Tiger! Tiger! Tiger!) indicating in code to the Japanese navy that the Americans were caught completely by surprise. The Japanese attacked the harbor in two waves: the first wave had 183 planes and the second wave had 167 planes. Pillars of smoke, loud booms and low flying aircraft filled the air.

The American navy acted quickly, and several gunners started shooting with anti-aircraft guns at Japanese planes within five minutes of the initial attack. Admiral Husband Kimmel, in charge of the harbor, sent out a quick dispatch at 8 am: “AIR RAID ON PEARL HARBOR X THIS IS NOT A DRILL”. During the attack, twenty one naval vessels were either damaged or destroyed. Three hundred planes met the same fate. The sinking of the U.S.S. Arizona battleship was the biggest loss of the day with approximately 1,100 dead. Sinking in less than nine minutes, it contributed to over half of the fatalities of the day. Over 2,300 people were killed and roughly the same number were injured in the attack that lasted two hours. Many of the Japanese bombs and torpedoes hit their targets, but all five of the Japanese subs were sunk during the attack.

Pearl Harbor was a strategic naval station with continual occupation through a treaty by the American military since 1908. It developed into the hub of American naval power in the Pacific. The attack on Pearl Harbor outraged Americans and brought the United States out of its policy of isolationism and into World War II. Pearl Harbor became the rallying cry as Americans fought alongside their allies during the war once America declared war on Germany and Italy on December 11, 1941. At the end of the war, America became a leader of the Free World.

As Japanese troops moved into the the southern part of Indochina in 1941 in an effort to expand its control of Asia, they posed a threat to both the South Seas and Singapore, and the United States responded by stopping exports to Japan.

During this time, military leaders began plans to wage war against the United States since it had been hostile to the Japanese invasion of China. The U.S. had already placed severe restrictive embargoes on Japan to curb its aggression. Rather than give into these demands, Japan decided to organize a surprise attack against the United States to destroy their navy before they entered the war. They wanted to catch Americans when they were unprepared for the assault.

On November 23, 1941 Vice Admiral Chuichi Nagumo left Estorofo Island off of Northeastern Japan with six aircraft carriers, nine destroyers, two battleships, two heavy and one light cruiser and three submarines. They zigzagged across the Pacific to avoid major shipping lanes in one and half weeks. On December 6, 1941, thirty three Japanese ships traveled within two hundred miles of Pearl Harbor. After striking Pearl Harbor, the Japanese later took over control of U.S. military bases in Guam, the Philippines, and Wake Island.